After getting rested up and with our internal clocks still on EST, we woke up bright and early Tuesday morning, jumped up, got dressed, and by 6 AM we were out walking around in the desert adjacent to the condos, with our meal bars in hand. We had only been walking 10 minutes or so, when I suddenly felt a sharp pointing pain in my toe. I looked down and a small chunk of cactus had decided to travel with me. This is not the first time that I’ve had a run in with cacti, and learned in the past not to use ones fingers to try and remove the piece. After doing just that my first encounter, I wound up with it sticking in both hands and then my foot. So being the pro that I now am, I grabbed a stick and carefully pried it out! We cautiously walked up along the Estero, and enjoyed watching several Egrets, Herons and several other beautiful birds. After walking for about an hour or so, we headed back to the condo for a cup of hot tea and a banana.

Later that morning, a group of us got into SUVs and enjoyed the beautiful drive leading to the trailhead of Nacapule Canyon. From a distance it just looks like a line of craggy, barren mountains, but as you start walking into the wash, it begins to slowly open up affording the first few glimpses into the canyon itself. At first you’re walking along a path comprised of thousands of small stones, which become medium and eventually larger sized stones. Several large boulders that have to be climbed and crossed over add great interest to this already amazing trail. Before you know it you have walked some distance and the canyon has completely opened up and there are what appear to be several small oases in different areas. Pools of clear water with frogs and a variety of water bugs inhabiting them are lined with a gorgeous assortment of palm trees giving a much appreciated shade.

It’s at one of the amazing locations that Wes and I climbed out onto a downed palm tree and sat there, feet dangling over the clear water below and ate our lunch. When we finished, we walked on up the canyon a ways and came to where several of the others in our group were watching Coatis. Fortunately for us, we got to see them too several times as they walked back and forth along the edge of a cliff across from where we were all standing. Coatis look a lot like a stretched out raccoon and make the same type of noise, only a bit higher, and they seem to be more talkative than raccoons. Who knows, perhaps there was a serious group meeting going on when we were observing them! There were also lots of great lizards along the way. One of the most fascinating is the Whiptail, sporting a very nice long tail. We began ascending higher, following our friend Martha, as she had been there several times before. A couple of beautiful big Fig trees were passed along the way to the tunnel rocks. Here one had to place one foot in front, and then behind, on large boulders to climb to the entrance area, where you then had to bend over and climb up through this cool tunnel-like area.

As you came out the other end it opened up a bit once again, with more interesting Fig Trees and other flora and fauna scattered throughout the boulder lined area. A short walk up hill and we came to another cave-like room, formed by several massive boulders and rocks that were resting on one another. At the upward end of this dark area was a small hole that one could climb through and hike all the way to the top, which a few did another day when there was more available time. It was here that we turned around and started towards the bottom of the canyon along with friends Dave, and Martha. Once back down, we joined up with the others and headed home to the condos. 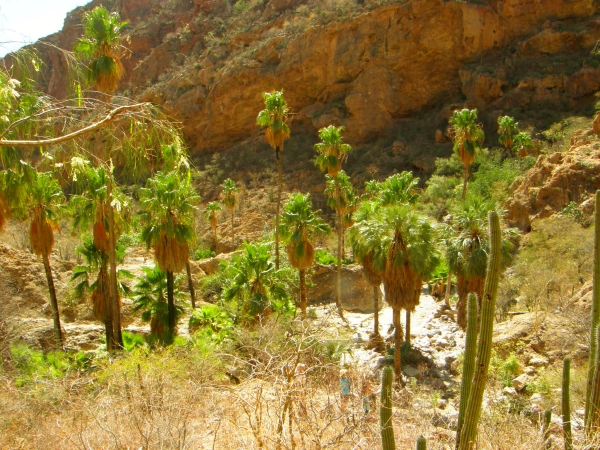 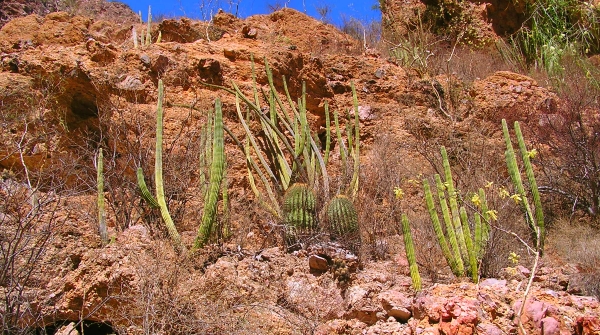 We arrived back at the condo in time to enjoy a sandwich made with freshly sliced avocado and Manchego cheese, on the adjacent patio. It was a lovely spot to sit and relax as we were surrounded by beautifully blooming Bougainvilleas, while listening to the sounds of the ocean and shorebirds. Being recharged, we then met up with Susan and Dave and were taken into Guaymos by Martha. The ride there along the ocean was beautiful and afforded a stunning view of our condos with the backdrop of the mountains behind them. We passed a couple of small marinas and a great little fishing camp on the way. Our first destination was the old marina where the fishing and shrimp boats were docked. They were not in use at the time, and made for wonderfully great photos that will become miniature paintings in the near future! It was pretty amazing just standing there taking it all in, knowing how many years it had been in operation, and imagining what it was like when it all came to life.

Leaving the marina, we then went to the city hall, which was very interesting with its open air court yard area in the middle. We then walked down the street a ways to a small park with a beautiful elaborately built gazebo that was adjacent to a magnificent old church. A large flock of Pigeons called the gazebo home and added life to the entire setting with their beautiful iridescent feathers shining in the sun as they preened. The church roof had been damaged in the hurricane and leaked, so the pews had been moved outside under a large tarp covered area, creating a lovely outdoor sanctuary surrounded by an array of blooming flowers. Then we walked to the newly renovated sea wall area, where a beautiful statue stands as a symbol to recognize the many men that have made, and make, fishing their livelihood. We were thrilled to learn that either Martha’s great or great-great grandfather was the model for the wonderful sculpture.

Martha was an amazing “tour guide”, and taught us all so many wonderful and interesting things about the history of the area and the culture, since she grew up in Guaymos. She graciously answered question after question about why this or how’s that, including why the trees are painted white towards the bottom. This is something I had wondered about for many years and was happy to learn that it is done to help prevent sunburn on the trees. We all then went for an interesting and insightful walk through the downtown market area. It was like stepping back in time and made for a treasured memory. Being the only four “Gringos” there, and with Wes, Dave and I being a foot taller than everyone else, also added to the sense of amazement and mystery. After trying to absorb the entire scene as it unfolded, while we walked through, it was then time for a real treat! Martha bought us freshly made churros from a gentleman who has been in the same exact location making them since he was a boy.  Oh my goodness. . . they were unbelievably delicious and I had to tell the talented churro maker “Muy delicioso” . . . meaning very, very delicious!! Wow, the entire experience kept getting better as we went along, and Martha continued to share more historical facts and answer our many questions on the ride back to San Carlos.

After giving lots of thanks to Martha for our wonderful afternoon adventure, it was time to get ready for dinner that evening. We all ate at a restaurant where the chef came out and prepared most peoples’ meals atop a couple of rolling carts right there in front of us. Wonderfully delicious smells filled the air and at times the pans would flare up, sending flames reaching high into the air, creating a very dramatic performance to say the least. All the while a nice older gentleman played the piano in the background, and all came to life when he played the Mexican Hat Dance, and we all clapped in unison, on cue!! With full, happy tummies, we headed back to the condos and it was the close to another wonderful and amazing day! This amazing expedition trip to San Carlos was organized by David J. Wagner, L.L.C. to enable participating artists to produce a body of artwork for display in an upcoming museum exhibition entitled, “The Sea of Cortez”. I will share more info on this wonderful upcoming show at the conclusion of my posts about the adventures of the Cortez trip.

Fresh off the easel: Poor Wes has been stuck in the basement and at the computer since our return.  He’s been putting together packages of paintings for a variety of shows including our upcoming museum exhibition tour.  Today alone, he spent several hours filling out over 200 forms! I finished my first painting from this amazing expedition this past week.  It’s of a Sally Lightfoot crab that I photographed while on our boat trip to an island off of San Carlos.  It’s a gorgeous and brightly colored crab also know as “Grapsus grapsus”,  making it very fun to paint indeed!!  It’s also quite special as this beautiful crab shares my mom’s name . . .  Sally  🙂

4 thoughts on “More Adventures From the Sea of Cortez!”