“Serenity is not freedom from the storm, but peace amid the storm”
~ Anonymous

Hail gathered on our deck after a storm this past week

With spring flowers . . . comes spring showers . . . or maybe spring hail that is! One morning this past week began as a nice, quiet and lovely morning. However, while I sat there eating breakfast and reading, I noticed it started to rain a little, then all of a sudden, it began to hail . . . and hail . . . and hail! This went on for almost twenty minutes, with quite a bit of lightening and thunder mixed in as well. During the storm, we lost power, so I just pulled my chair up to the dining room window, and watched the springtime storm show. It was quite spectacular at times, with the light colored sky back-lighting the distant mountains, the lightning strikes that were on this side of the cove, and some very close, were spectacular and looked so three-dimensional and close, that you almost felt you could touch them! Which of course would never be a good idea, nonetheless, it made for an amazing show! One of the favorite striking places of the lightning now, is the new cell tower, which we all call “The Steel Redwood”, atop a nearby mountain, and causes such thunder to roar that it shakes the entire house at times! It keeps life interesting anyway! While we were quite impressed with our collection of hail by the conclusion of the storm, it was nothing compared to what our friend, Don that lives in North Carolina, received later that afternoon! It looked like a blizzard had hit his property!  He had a 14 1/2 inch “iceberg” outside his screen door, which he was finally able to chip away a couple days later, so he could open his door once again!

Fortunately we had decided to clean our fish tank the day before, which was a picture perfect day, weather wise. Wes had set up a smaller tank a couple of days before to get the water acclimated for all of our “swimming kids”. So upon lowering the water level in the big tank, we started the task of carefully catching all of the fish, which is quite a job, since it’s filled with lots . . . and I mean lots of Guppies, many of which are babies. After this tedious task was completed, the tank was emptied the rest of the way and the entire contents was cleaned and scrubbed, with yours truly doing most of the scrubbing of the rocks and plants, while Wes concentrated mainly on the tank and filter. By later that afternoon, this somewhat dreaded task was finished, the tank was reassembled and arranged, and that evening the fish were introduced back into their very clean home.

Me scrubbing the rocks and plants from the fish tank

The clean fish tank in our living room

After being given a flyer from our friend Fred, we were reminded of the Smoky Mountain Fiber Arts Festival this past weekend at our local Visitor Center, here in Townsend, which was to have sheep herding and shearing demonstrations. I’ve always imagined having a lush, green pasture, with a small stream meandering through it, dotted with magnificent oaks scattered about, and of course filled with sheep! Black-face, white-face and brown-face sheep, or as I learned this weekend, Tunis sheep. So as you can see, I have great affection for sheep, and always jump at the chance to be able to see, and perhaps pet them. So off we went, to the festival and arrived a few minutes before the herding demonstration, which worked out quite nicely as there were five adorable lambs, all of the Tunis breed! They were beautiful and so precious sporting their new, soft, tan coats as they kept very close to their mommies! It was then time for the demonstration, so the first of three Border Collies were excitedly let out, and began their impressive performance, as their master whistled out commands, one after another. He looked like a small cutting horse as he went to the left, then the right, carefully keeping the sheep together, just as commanded. After a brief resting period for the sheep, the other two Collies were given a chance to show off their impressive skills as well.

The sheep ignoring the Collie

It was then time for the shearing demonstration. William Rick, a nice young gentleman wearing specially made shoes, from wool nonetheless, which make it to where he can feel the sheep’s body with his feet and they are soft to the sheep itself, unlike a stiff boot would be, stepped up. After giving us some information on the procedure, he gently took the big, fluffy sheep, and carefully and methodically worked with her until he had her reclining against his legs. He talked to her, and us as he went along carefully, yet quickly, working masterfully with the shaver, until he had at last gotten the entire wool shaved off in one impressive piece! I was completely impressed to say the least, not only at his gentleness and concern with the sheep, but also his mastery of the skill, and the best part . . . no nicks! The mommy sheep was quite glad to be done with her “visit to the salon” and was happily reunited with her beautiful twins back in the temporary enclosure. It was so impressive to see a young person that has learned such a wonderful life skill, and to already posses such mastery of it.

Are you comfortable and ready?

And . . . gone!  Mommy happily reunited with the babies!

We were thrilled to receive this past week, a personal copy of the newly published Arturi-Phillips book, Dictionary of Miniature Painters 1870-1970. This dictionary, which lists over 2,300 miniaturists (mostly historical British), includes just a handful of living miniaturists, of which only four are currently working post-1970, with one of them being myself. My portrait miniature painting, “That Adorable Age” is featured inside this beautiful book. If you have an interest in portrait miniatures, I highly recommend this wonderfully done and informative dictionary. You can find more information on it at http://portraitminiature.blogspot.com/ 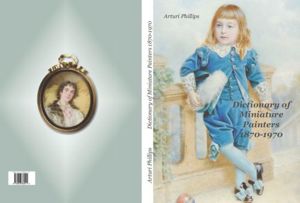 The cover image of the new miniature Dictionary 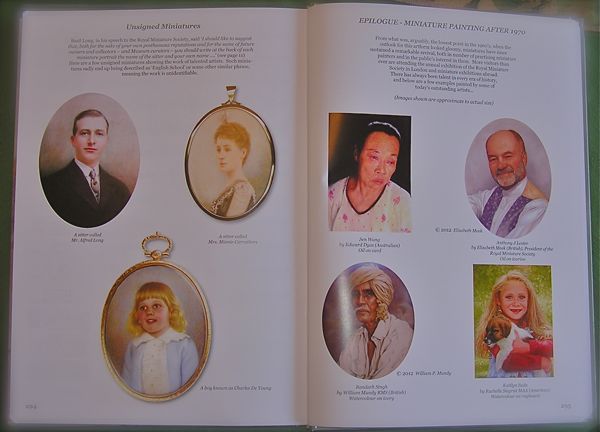 Fresh Off the Easel: Wes finished his miniature painting of two happy frogs titled “Pond Pals” this past week. I’m putting the finishing touches on my St. George commission and am also starting another painting of a White Pigeon sitting in the sunlight.

~ Upcoming Events and Exhibitions of Our Paintings This Week ~

(Wes’ miniature has already sold in this show)

~ 21st International Miniature Show at the Seaside Art Gallery in Nags Head, NC.  This show opens April 28th and runs through June 2nd. Miniatures are displayed in the gallery, as they arrive, so are some miniatures are already on display, which include ours and they can be seen at the above linked website.  Happily two of ours have already sold.

To view all our many exhibits: http://www.artofwildlife.com/exhibitschedule.html

“Collect the future’s history today while it is still affordable.”

Until next time    ~ Rachelle