We jumped into the car with friend Kit early last Wednesday morning, and the three of us headed off for our day of adventure.  After driving along the Foothills Parkway, we stopped by Chilhowee Lake to check out the even lower water levels during the dam inspection.  It was unbelievable to say the least and looks pretty amazing!  Leaving there we drove along the curviest road around, consisting of 318 curves in just 11 miles, known as The Tail of the Dragon, and I always feel like I’m trying to stay on a drunk horse, while riding in the passenger seat on this super winding road!

A couple of hours later, we arrived at one of the Nation’s most impressive remnants of old-growth forest.  Joyce Kilmer Memorial forest contains magnificent examples of over 100 different tree species, many over 400 years old! Several of these stunning, ancient giants are over 100 feet tall and more than 20 feet in circumference!

In 1936, this 3,800-acre forest was set aside as a memorial to Author Joyce Kilmer, who wrote the poem “Trees”, and was killed in action, while serving in France during World War I.

It’s truly awe-inspiring walking amidst these gorgeous giants, making one feel very small! Viewed from the base, the trunks appear endless on some, and their bark looks like thick chunks of cork! Unfortunately, most of the big Hemlocks are dead, having succumbed to the adelgid, that has killed so many in our region.  Others have been hit by lightning, and have the tops missing out of them, but regardless of their individual setbacks, continue to grow!

Before long we found our walk through the tall giants coming to an end, as we reached the parking lot, but alas, there were more adventures to be had!  We left Joyce Kilmer and drove along the Cherohala Skyway, stopping occasionally to see and take photos of the magnificent views, until we reached the trailhead for Huckleberry Bald.

Having wanted to return to this bald for quite sometime now, I was very excited as we started off walking the wide path leading through a Beech grove.  Recent rains created ample muddy spots along the path, and it was fun checking out the various footprints left by visitors of all shapes and sizes!

It was beautiful walking through the vast expanse of grass gently blowing in the cool breeze, as we reached the crest of the lower bald.  We walked on higher and higher until we reached the  very top, and I felt once again like I was standing on top of the world, and amazing feeling indeed!

The view from the bald was unbelievable thanks to the very clear air, and you could see for miles and miles in all directions . . . a 360 degree view that was spectacular!  I had to stop and imagine what the starry night sky would look like, from this vantage point!

We spent some time “on top of the world” admiring the magnificent scene, before hiking back down to the trailhead below.  From there, we drove along the remainder of the Cherohala Skyway until we came to the side road leading to Bald River Falls. 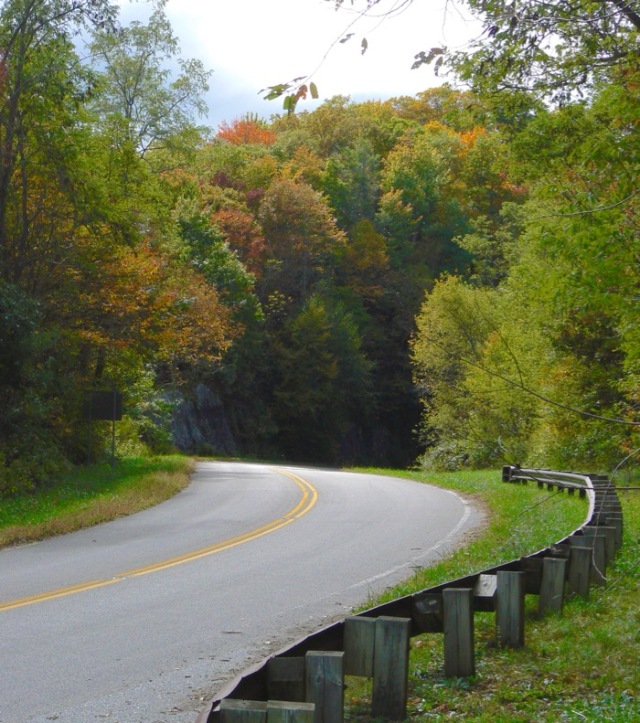 Bald River Falls is a spectacular falls, and even more so with the bright red and yellows splashes of fall color starting to show.  I immediately climbed down the steep bank leading to the base of the falls and spent some time there basking in the sheer beauty of it, while getting a good dose of negative ions as well!

While Kit stayed camped out at the base taking photographs, Wes and I climbed the short hike to the top of the falls, which is spectacular in its own way.

Having spent quite some time there enjoying yet another gorgeous setting, we realized that it was getting late, and time to start our journey back home.  During the drive back, we recounted the highlights of the day, from our hike into a primeval forest to feeling on top of the world, and decided it had been a truly wonderful day!

~ The latest paintings off of the Siegrists’ Easels ~

This past week Wes finished his painting of Niagara Falls and the Canadian Hornblower, painted from a photo taken during our recent visit there.  I’m painting the finishing touches on a miniature landscape painting, featuring an oak tree-lined clay road on a Southern Georgia Plantation.

2 thoughts on “From A Primeval Forest to the Top of the World in Just One Day!”