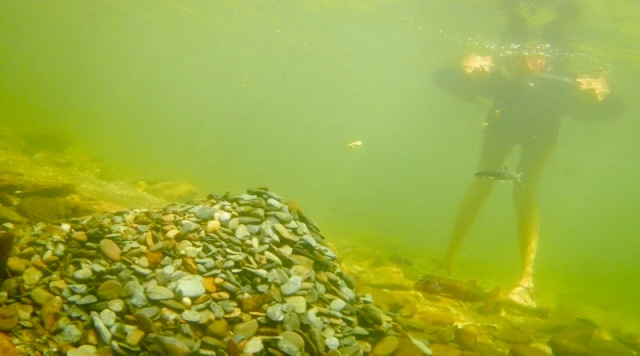 Okay . . . I’ll admit it.  After Wes told me about the fish he saw carrying rocks, and I saw the video of it, I was instantly mesmerized and became mildly . . . okay . . . very obsessed with seeing this amazing feat with my own eyes in real life!  So one afternoon this past week, Wes suggested we go try and find one before the big rains came and clouded up the water.  Needless to say, I was instantly ready to go, and excitement mounted!  Upon getting into the icy water, we snorkeled over to where he watched it the last time, and sadly it’s nest was mostly gone.  So we snorkeled farther up the stream, and suddenly this large rock pyramid, about two foot high came into view.  At first, I thought, now who would’ve taken the time to build this in such deep water?

Then all of a sudden I saw him, a big, beautiful Bluehead Chub Minnow, about 8 inches in length, carrying a large stone in its mouth while swimming upstream to the pyramid, where he deposited it onto the top of his amazing underwater sculpture!  I instantly motioned to Wes to come and see it and take videos.  Totally captivated, I watched him work for over half an hour on it, while carrying rocks twice the size of his head at times, with his mouth, while swimming against a very strong current no less! Can you imagine us as humans being able to do that? Male Bluehead Chubs construct these pyramid nests in swift moving water, and they can reach sizes up to two feet high and several feet wide, and are sometimes constructed in one day!  From what I read, these hard-working fish may carry several thousand stones, over 20 yards or more to their nest site.

These amazing nests not only help attract the chubs’ mates but also provide a safe hiding place for other minnow species, who also use them.  The eggs of the chubs and minnows have a much higher survival rate this way, rather than spawned alone.  And not only is the constructing abilities of this robust chub minnow impressive this time of year, but also the stunningly vivid breeding colors of different minnow species.  Wow . . . you just gotta love nature!!!

Another morning we went kayaking, ending up at a favorite place to swim and snorkel.  Even with strong headwinds, it was a relaxing morning, as we paddled our way along.  We saw a few Belted Kingfishers and one Commorant which graciously swam right alongside my kayak, the clear water providing a great view of him. We were delighted to see that the Bryzoas had returned in great number, and just had to gently touch one.  Also commonly known as moss animals, they are a phylum of aquatic invertebrate animals which are filter feeders that sieve food particles out of the water and are only found living in healthy water.

Soon we had reached our snorkeling spot, and as quickly as we pulled the kayaks onto the banks, we were in the water.  Immediately we saw fish everywhere, and streams of sunlight danced in the water as bubbles from nearby cascades surrounded me, creating a glorious underwater setting!

One of the neatest sites of the day I unfortunately missed, but thankfully Wes captured it on video. It was a precious little turtle that swam about, allowing Wes to get some great video footage of it.   We snorkeled quite sometime before getting out to warm up a bit and eat lunch.

Then it was time for a bit of exploring and more fun in the water, so finding a small waterfall, I decided to climb up and sit in the middle of it.  Upon doing so, I decided it provided an amazing back massage in a beautiful setting!  I talked Kit into sitting in it with me, and then Wes, and of course we all had a ball and did lots of laughing while trying to maintain our seat against the tremendously strong current.

Many thanks to Kit who captured these great photos of the delightfully simple fun! 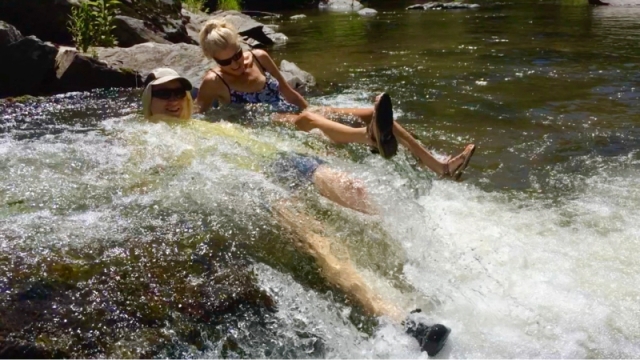 Soon it was time to head back, and as always I wasn’t ready to leave.  Wes, Kit and Mike had already returned to the launch site, therefore missing the amazing encounter I was about to have!  Hearing crunching sounds along the bank nearby, I stopped paddling to see what it was.  At that point, a large black bear walked out into view, and just as I took a photo, it gruffed at me!  So I quickly paddled a little farther away and carefully watched as it walked out onto a sunlit log and jumped into the water.  It swam across, and I could hear him breathing loudly through his nose with each stroke, all the while considering myself blessed to have been at the right place at the right time!

We’re both currently finishing some paintings that I’ll share next week with you!

2 thoughts on “A Fish That Carries Rocks II”