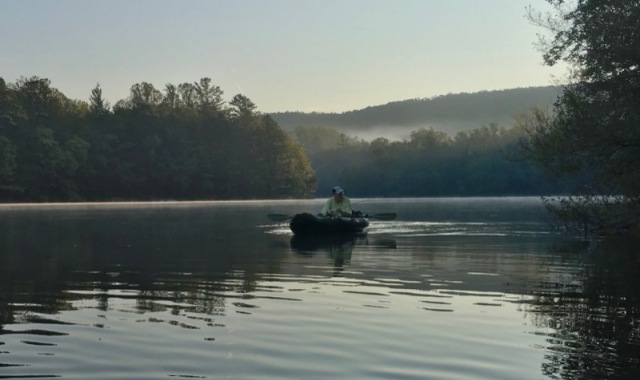 Wes and I went camping for a few days this past week, and as always it was truly relaxing and so nice to be out of touch with the world for a short time!  While we enjoyed our usual activities of kayaking, hiking, swimming, and fishing, we enjoyed a few new experiences this time which were really amazing!

Late one evening while on the water paddling and fishing with friends, I had paddled a short distance further than the others when I heard something splashing and swimming in the water nearby.  Since it was so late in the evening and daylight was growing dim, I wanted to keep an eye on whatever it was.  At first, I couldn’t figure out what I was seeing, as it had a very long snout, much too long for a bear or a deer, and it was red.  After it drew nearer, I finally realized it was a BIG wild hog, and I couldn’t believe it, for the numerous times I have seen wild hogs in woods and pastures, I had never seen one swim! I must say it was truly amazing to watch, as this hog seemed to almost move with the speed and efficiency of a dolphin.  I was thrilled I had managed to capture it on video and am delighted to share a short clip of it with you.

Our friend in the canoe behind was intently fishing and didn’t even realize this large furry passerby was so close!  Afterward, as I relaxingly paddled back to the campsite, still reveling in my amazing encounter, the setting sun bathed the evening sky in brilliant pinks and oranges, reflecting on the surrounding water and filling my world with warmth and color!

That evening as we sat around the campfire with several friends, we all delighted in watching the amazing hog encounter I had captured on video!  With a new moon and a very dark sky, it was decided that we should go to a clearing where we could see a nice open view of the nighttime sky.  We found the perfect spot for gazing up at the stars, and whilst laying on our backs, we were delighted to even see the milky way!  This became a nightly tradition, and the last evening we received a real treat, as several meteors zoomed across the vast, dark sky, making our nightly viewing even better!  There’s something quite peaceful and mesmerizing about laying on one’s back and gazing up into a vast nighttime sky filled with stars, and I enjoyed every second of it! 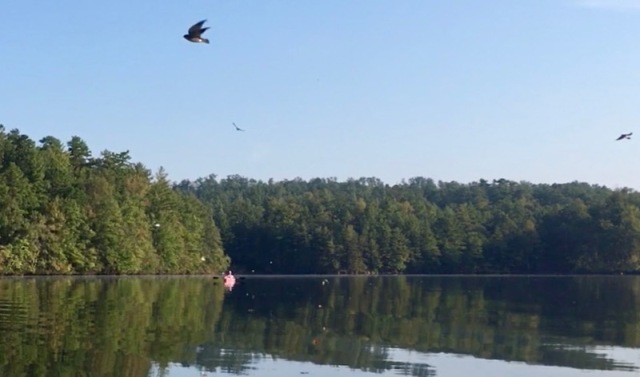 Early each morning, we climbed into our kayaks and headed out on the water, and while each time I watched hundreds of swallows flying about catching bugs on the fly, I decided the last morning to just sit very still in the midst of them.  What a wonderful idea that was, as I found myself swallowed up in swallows, as the flying acrobats literally engulfed me at times, zooming mere feet from my head!  It was truly amazing, and indeed a magical experience, with these incredible speedsters coming right at me at times and pulling up inches from my face!  All that could be heard was their chirping and chattering and the sound of their wings on the fly, and hundreds of them at that!  Their numbers were so great in fact, that when they joined together and lifted into the air, they formed what looked like a tornado of birds!  I sat in my kayak and watched this incredible show for at least an hour before the beautiful little birds disappeared.  I hope you enjoy this little clip from once of the videos I captured of them.

After the swallows had left I decided to flyfish while also watching the clouds that were forming above and shapeshifting as they slowly moved across the vast blue sky.  I saw “fish” that turned into “bears” as well as “whales” and many other large fluffy creatures while laying back, relaxing in my kayak.

The sky certainly wasn’t the only thing of beauty, since some of the leaves were starting to turn bright red, showing signs of impending fall weather.  We enjoyed daily hikes, followed by cooling off whilst swimming blissfully in water that was cool, but not cold enough to warrant wearing our wetsuits thankfully. 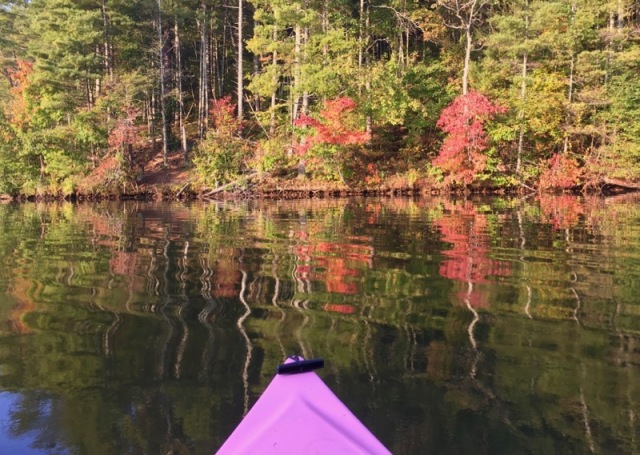 It was a most wonderful four days, but alas soon came the time to leave and return home.  Although many great memories were made, my encounters with the swallows, stars and the swimming pig were truly amazing!

We live in Townsend, TN, by the Great Smoky Mountains. It’s a beautiful area that we enjoy by spending time most days walking, riding bikes, or taking an occasional hike in the park. We also greatly enjoy working in our flower and vegetable gardens in season, and feeding the critters. We specialize in miniature paintings. To discover more about us, our paintings and our historic museum touring exhibition visit our website at artofwildlife.com.