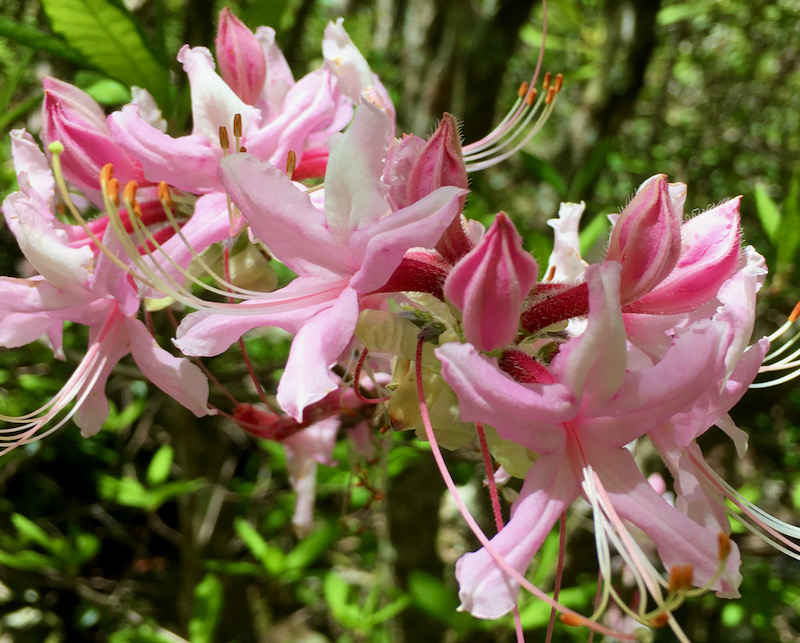 Our weather here has been like a yoyo this past month. It gets warmer than normal, and then a cold front comes and kills back much of the flowering shrubs, trees and more. Well, the past few days brought the most recent cold snap which killed a big part of the baby leaves on the trees this time! It’s another “limbo-spring” here in the Smokies to say the least. However, before the last cold front, Wes and I loaded up the kayaks, packed a lunch and headed to the water for the day. It was a gorgeous day too, with clear blue skies above and the bright pink blossoms of wild azaleas dotting the hillsides. 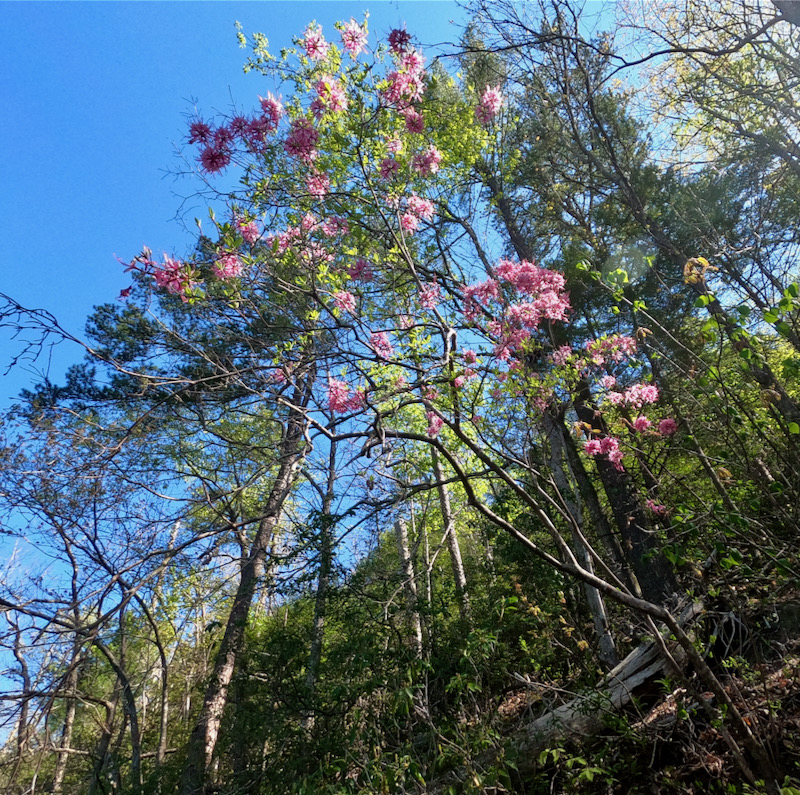 Unbelievably the water’s surface was smooth that morning, with a gentle wind at our backs, just enough to help push us along, which was very nice! After paddling for awhile, we climbed out of the kayaks and ate our lunch, while perched on a large rock in the sunshine. While Wes walked along the shore fishing for Rainbow Trout, which he caught a couple of, I sat on the big rock whilst dipping me feet into the icy water. After they went numb, it actually felt good . . . Ha! The air was filled with the symphony of cascades and springtime birdsong, it was heavenly to say the least, and I could literally feel myself melting with relaxation. 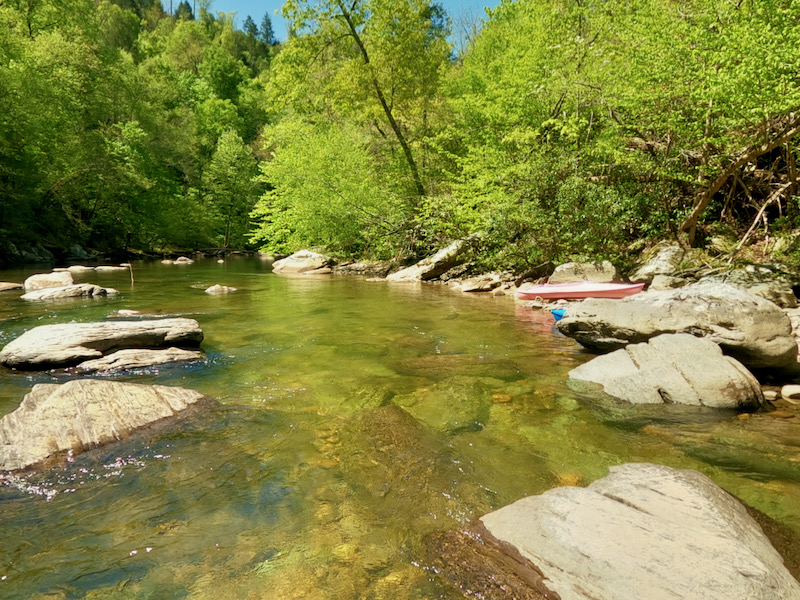 We’ve learned with kayaking, to enjoy and appreciate good paddling conditions when we have them. Paddling along after lunch, all was going pretty smoothly, until I came to a certain section in the river, when all of a sudden I was hit with what seemed like near hurricane force winds, so strong that it caught my BIG pink sun hat, and pulled it down over my face, completely covering it whilst turning the world pink and blocking my vision entirely! At that point the wind blew my kayak sideways, making it parallel with the waves that were now white capping. I could feel the intense wind and waves about to roll me over, while I was still trying to get my strapped on hat off of my face, so I could see where I was going. Finally I got it off and quickly realigned myself, facing my kayak into the wind and oncoming waves. I realized that as hard as I was paddling, the wind was strong enough, that it was actually blowing me backwards, so I just kept myself facing that direction until I was able to slowly make headway once the wind died down some.

Thankfully once I paddled through that section, the wind subsided for quite sometime. So I happily went back to photographing and videoing the beautiful wildflowers scattered about. Delicate bright red flowers of the Fire Pinks covered the banks in areas, and white flowering trees canopied above, adding to the beauty! 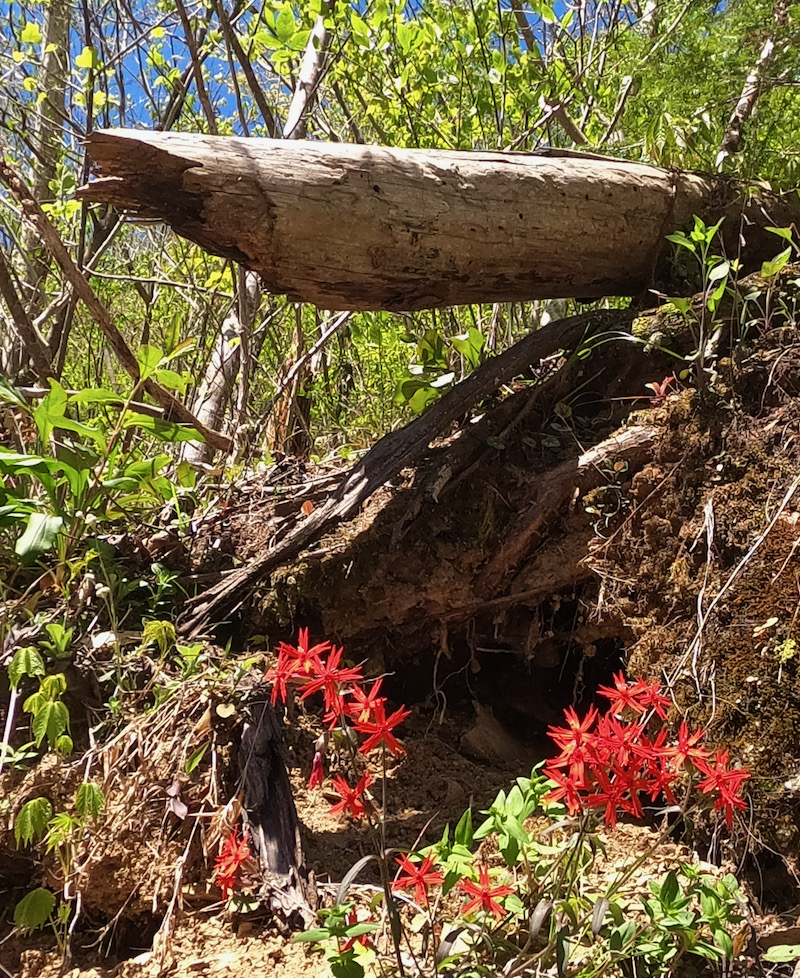 There were several large clumps of beautiful Dwarf Crested Iris blooming as well, and this one in particular looked so lovely perched upon this moss covered rock near the water’s edge, appearing almost jungle like! 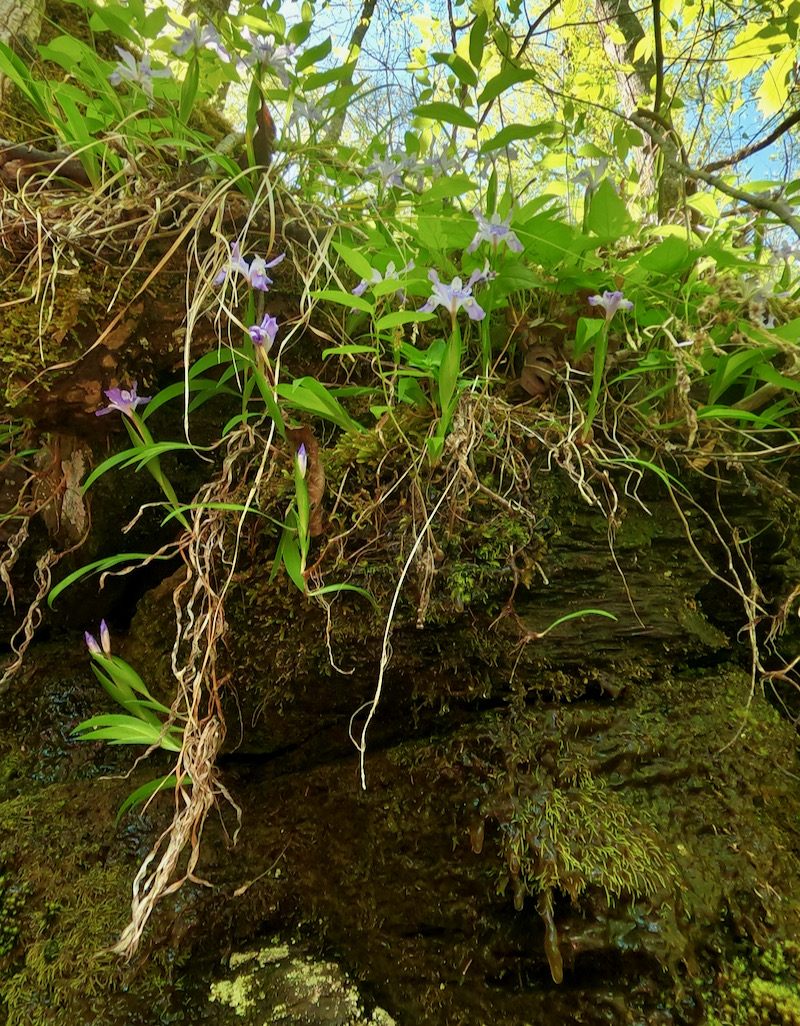 We enjoyed relaxingly paddling along until rounding another sharp bend, at which point we faced directly into the mouth of what felt like a “hurricane” once more! As I paddled, the waves were actually breaking over the front of my kayak at times, sending a spray of icy water clean over my head! I was so thankful that the sun was out and that the air temp was warmer that day. I have to admit though, that I had a blast riding over the waves and was sad when we reached our take out point. It was another great day and adventure indeed!

This Week’s Tip From The 1892 Cookbook

Okay, so this is what “Dr. Hall” said about good eating practices, and I’ll share the rest next week. I don’t know about you, but it seems that anxious thoughts have become more prevalent during the past year, so I’m thinking if everyone followed that rule, there’d be starving people all around! But who knows, he could be right. I do have to wonder though, why one shouldn’t eat after intense mental effort, such as spending time on the phone with let’s say . . . insurance companies’ computer, etc! Perhaps he was concerned that after such taxing mental conditions, one might miss their mouth and poke out an eye with a fork… HaHa! 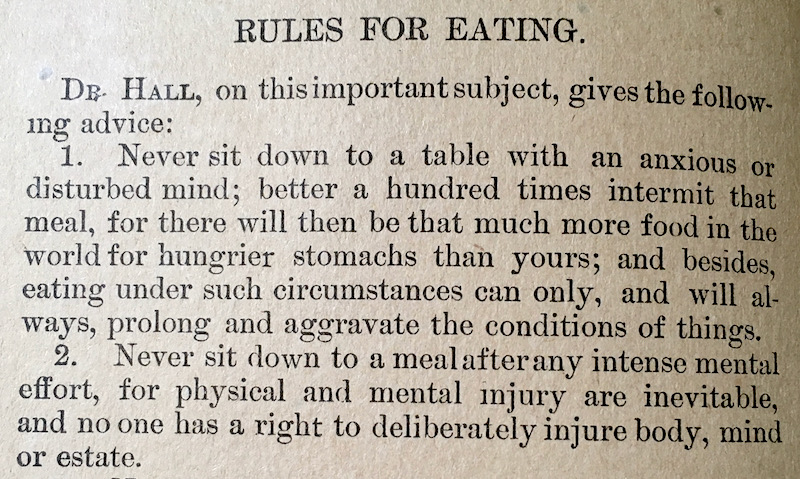 See our miniatures in person this week

To see our available miniature paintings, visit our website, artofwildlife.com

Until Next Time ~ Rachelle

2 thoughts on “The Day My World Turned Pink”

We live in Townsend, TN, by the Great Smoky Mountains. It’s a beautiful area that we enjoy by spending time most days walking, riding bikes, or taking an occasional hike in the park. We also greatly enjoy working in our flower and vegetable gardens in season, and feeding the critters. We specialize in miniature paintings. To discover more about us, our paintings and our historic museum touring exhibition visit our website at artofwildlife.com.