Busy . . . busy . . . busy . . . that’s what we’ve been much of this past week! We’ve been getting ready for my family, all eight of them, to arrive to spend Christmas week here in the Smokies with us! They should be getting here late tonight, so we’re getting the last few things on the “to do” list done! It’s going to be a splendid and very Merry Christmas with my family all around us and my little nephew, Tyler, and niece, Haydyn, here! It will be fun to see Christmas through the eyes of a child once again! In addition to getting ready for their impending visit, we spent quite a bit of time painting this past week as well. I have also been making numerous trips out daily to feed my feathered and furry friends. My little friend Stubbs, the Tufted Titmouse, has come several times, which makes me a happy camper. He’s very happy and content to sit in his bowl of finely crunched p-nuts and sunflower chips and gulp it down, and I’m perfectly content and happy to watch him!

We’ve enjoyed some fun times with friends and neighbors this past week too! Our neighborhood had a Christmas dinner party at a lovely restaurant in nearby Alcoa one evening. I took my camera with good intentions of getting a nice photo of the group, but alas we were having so much fun listening to our friends Gary and Pam, that I lost track of time and completely forgot to have a photo taken. Oh well, nonetheless, we were obviously having a ball, as they are great storytellers and very funny! Another evening, our friend Kit joined us, and we spent the evening at friends Fred and Barb’s house, where we were also joined by friends Pat and Frank. As we nibbled on some delicious snacks, we watched the Christmas movie “Elf”, and did more laughing than anything! A homemade orange-spiced brownie topped off with a bit of Extreme Moose Tracks ice cream put a divine ending to the evening! Fred and Barb graciously sent home more mealworms for my little wren buddy, Peedeepeeps, and Frank and Pat sent home “pizza bones” . . . pizza crusts . . . to be made into future peanut butter treats for the birds and squirrels.  Many apologies for not having many photos to share with you this week, but you can be sure that next week’s blog will certainly be an exciting one, with numerous photos and entertaining stories to share!

Fresh off the easel ~ Wes finished his miniature painting of a White Rhino and I completed a cute little bunny. Both of these will be among our new paintings for the Southeastern Wildlife Exposition (SEWE) this coming February in Charleston, SC.

Come see the artwork in person at our exhibitions!

Cherish your loved one or a beloved pet in miniature!

Don’t miss out on our news! “Sign Up” to receive an email each time I update the blog!

Until next time ~ Rachelle

The moss covered path in the front gardens.

Storms . . . . that’s an understatement, as way too many of you know! Fortunately for us in Townsend, we have once again been blessed by escaping the really severe ones. It seems as soon as the storms approach the Foothills, they break apart, splitting in two, and go around to the north and south of Townsend. I don’t know why, but we’re sure thankful each time. Even though we escaped much of the worst parts, we still had our share of interesting weather. Last Wednesday evening, the spring peepers were “singing” in hopes of rain, while we too were hoping and praying for some rain, since it was beginning to dry out once again. There was a nice breeze in the air, but it appeared that most of the rain was going to miss us. As we watched and waited, the gentle breezes turned into winds . . . while the Peepers continued singing. Then the thunder started rumbling in the distance, and the winds continued to pick up with stronger gusts. Before too long it began to sprinkle, and the peepers sang even louder with excitement! The gentle rain quickly became harder, and we were awakened by what sounded like large tree limbs hitting our house. Both of us jumped up, thinking it was an approaching tornado, and quickly realized that it was large sized hail hitting our metal roof! As I stood looking out the living room window exclaiming “Oh . . . my precious Peonies”, I know the little peeper frogs were probably having second thoughts about their pleading songs for rain!

Thankfully, my peonies were unharmed by the hail, and are growing in beauty each day! 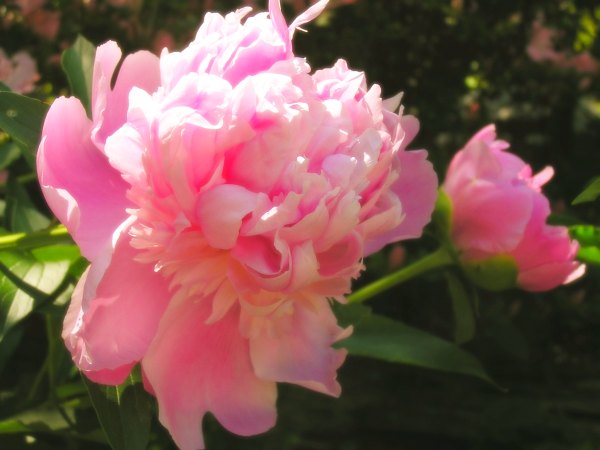 Actually, most of our weather recently has simply been wonderful, and we enjoyed it while working out in the yard yesterday. We spend time most evenings out in the gardens as well, and are getting to enjoy eating our meals out on the porches. Willow comes daily now for her special treats, and comes right up to the back door and peers in waiting for her goodies to be handed out. I tell her what a beautiful little girl she is, while she meticulously cleans herself after each treat, making sure to get everything spotless! I have several Doves now that come along with Dovecakes for seed handouts, and Peepdeeps is always ready for some help feeding the babies right now. The beautiful Scarlet Tanager couple has returned several times, and I was able to photograph him, during one of such visits. He is simply stunning to say the least! We also had three Black Snakes in our yard, at one time this past week! At one point I was walking around the path that runs alongside secret garden, and when I rounded the corner . . . there was Vicious, the black snake, rearing up like a cobra and coming slowly toward me as if he were saying, “Just try it lady, I’ll take you on!” He has a very big and bold attitude, thus his name . . . Vicious! 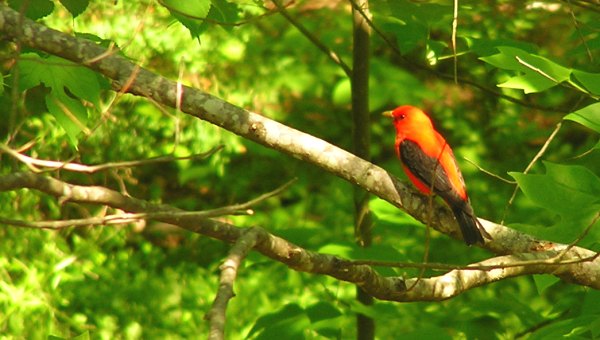 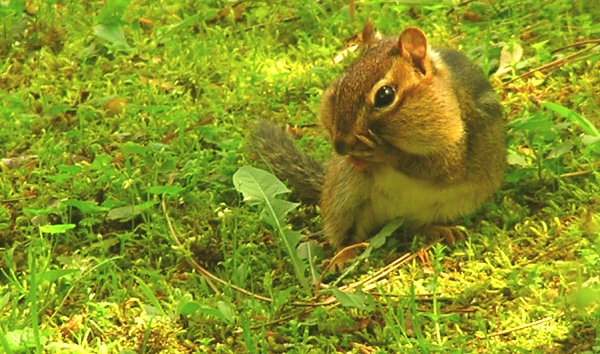 The highlight of this past week took place Friday evening.  It started with us meeting our neighbor friends, Beverly and Avery, at a nice shopping village here in Townsend, called Trillium Cove, where they were having an Art Walk and reception that evening.  After enjoying walking about a bit, buying a couple of new flowers and a Jalapeno plant for our garden, and enjoying a nice supper, we then drove down to the Heritage Center.  We arrived early enough to enjoy the delicious hors d’oeuvres, especially the chocolate covered strawberries, and visit for a time, before the much awaited concert began.  The seats filled up quickly as the musicians tuned their instruments in preparation for the wonderful scores to be played.  We couldn’t have asked for more perfectly beautiful weather that evening, as the melodious tunes began to fill the air, with the backdrop of the gorgeous brightly colored green mountains behind. The concert started off with the beautiful “Overture to Le nozze di Figaro”, by Mozart, thus creating for a delightful evening from the beginning. The orchestra gracefully carried us along with two more lovely selections by Beethoven and Tchaikovsky. The guest baritone singer, Kevin Richard Doherty, was then introduced and he immediately captivated the audience with his wonderful rendition of the “The Marriage of Figaro” by Mozart, and “The Barber of Seville”, creating wonderful antics and facial expressions that complemented his amazingly strong voice quite nicely. He received a well deserved standing ovation at the conclusion of his two pieces! Then they played beautifully one of my personal favorites, “Three Dances from Swan Lake Suite, Op. 20a Valse”, by Tchaikovsky. The conductor’s hands danced deliberately and gracefully through the air as he led them through this wonderful piece of music, creating the effect of a ballet of sort. The relaxing music went on and on, as the sun began to set, making the orchestra glow from the lights from their stands. The breeze was strong at times, and I became tickled as one of the violin players kept gently encouraging a page of his music to stay in place with his bow, as the ingenious clothes pin wasn’t holding it. All too quickly it came to an end, the much anticipated evening was over and they received a standing ovation, which thankfully for us, led into an encore piece!

Me with my delicious chocolate covered strawberry, Beverly and Avery with his yummy treat!

The Knoxville Symphony Orchestra at the Heritage Center.

Wes and I have enjoyed grilling over our fire pit in the back yard a couple of evening this past week. We also had a fire pit party with several of the neighbors, which was quite enjoyable as well, and were blessed with perfect cool weather for it!

Our thoughts and prayers are with those of you who have been affected in someway by the terrible storms the past couple of weeks.

until next time ~ Rachelle 🙂